After talking to Don I got some Rural Boss onto two paddocks and left the third paddock until much later because I just wanted to see what the difference was between the treated and untreated paddocks. The paddocks that I used the Rural Boss on were traditionally really good clover paddocks.

The protein levels in the milk prior to using Rural Boss were around 3.22%. After two weeks I put my milking herd on one of the Rural Boss treated paddocks and  their milk protein levels went up to 3.89% within the week. So then I went to the next paddock that I had it on and it just kept staying on around the 3.89%. Then I put them into the paddock that was well pastured, but hadn’t been treated with Rural Boss, and the protein dropped back down to 3.33%. I left them in there for a couple of days and then I put them back into the paddocks that had been treated with Rural Boss and the protein level went straight back up within the day. 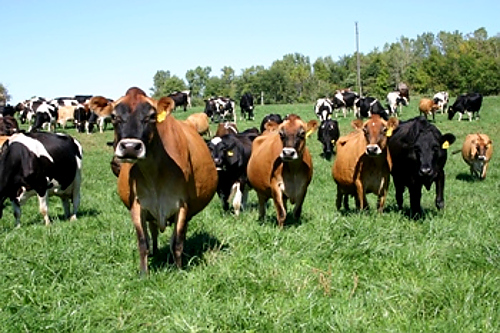 Because I have a mixture of breeds too, I don’t just have all Friesians which predominantly have higher protein levels and butterfat. I have quite a few crossbreds. We’ve always had good butterfat content but even the butterfat levels have gone up considerably since using Rural Boss. To get those sorts of levels in the protein and butterfat is really good. We don’t supplement feed grain or protein mix in the bail, we don’t have the infrastructure. That’s why we’ve never ever had those sorts of protein levels before. I prefer they get it out of the grass and out of what I grow rather than bringing costly things in. I like to get Rural Boss out on the grass, I reckon that’s the most economical way of feeding and keeping the cows in good condition. So no, I don’t feed in the bail and that is why it was really incredible to get such a rise and so quickly. I also put it on paddocks that I cut hay on. 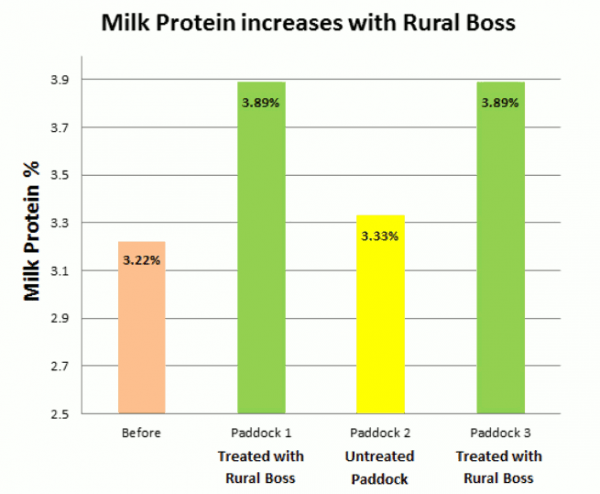 I had previously already put some super phosphate on, just straight super phosphate, several months before, and I noticed there’s bugger all feed. It is a bit tougher ground to where the dairy is, it’s about 15 kilometers away and different sort of ground, lighterground, earlier country. Interestingly since using Rural Boss they haven’t beared it out like they usually would, but they go into that treated paddock rather than a couple of paddocks that I’ve got some good y seed in.

So I’m really happy with the way they want to go in there and graze it, you know, they don’t lurk around the dairy at all, they want to get out there and start eating so you know, in that respect I was extremely happy with it. To increase those protein levels is really good and also I was really happy they’re not bearing it out so badly, I’m not getting cape weed and I’m not getting it going back to dust as it has before. It seems to be holding a bit better root matter. I cut the cows two different lots of hay. I put Rural Boss on one paddock where we cut most of our hay, and didn’t put it on half of another paddock. I kept those bails separate and then watched how they were eating the hay. They are cleaning up the Rural Boss treated hay a lot better. The untreated hay seems a little less coloured and not as appealing to the cows than the treated hay.

So convenience, and then secondly, the cost effectiveness. I was really happy to get the results we did with minimal outlay. I am looking forward to keep on using Rural Boss and seeing how elevated that protein level optimally may get, I’m hoping to crack the 4%. I also hope to gradually improve the health of my soil as well as the health of my cattle. The increased nutrition should help build the cattle’s immune systems, particularly for the young cattle that can be more prone to picking things up.

I have been very happy using Rural Boss and am con dent of being wowed again with the results for my particular  situation. When you know something is good you want to share that knowledge. I would de nitely recommend it to
others. It is such an exciting and cost-e ective way of maximizing pro ts and health for the land and the stock.